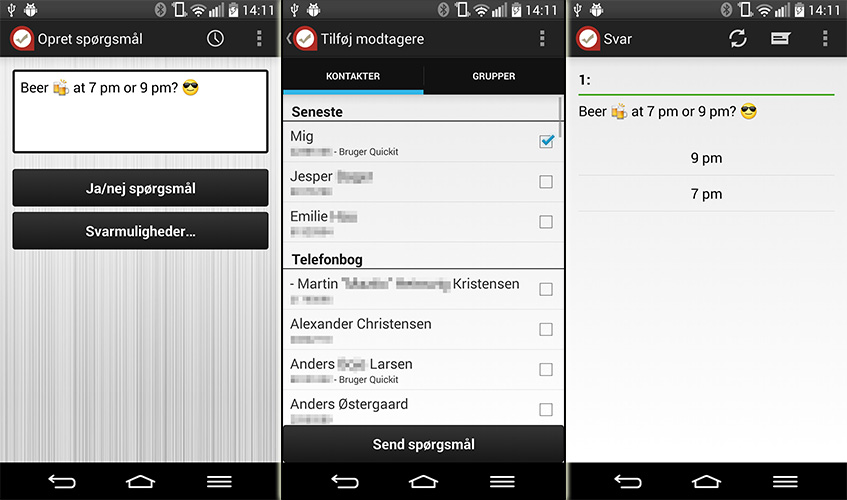 Quickit is a croos-platform app being developed in Xamarin Studio. Unfortunately I had to part ways with the development team before finishing the product as I had to start my bachelors degree at school. However, I would like to show off what I had made before leaving.

The essentials of the application is to ask your buddies a question and have them choose between a defined set of answers. Say I asked them “Want  to grab a beer tonight?” they’d then have the option to answer yes or no. You could also ask them about something more specific like “Beer at 7 pm or 9 pm?” you’d then have the option to define your own answers to that question.

The app lets you choose from all the contacts in your phonebook, however, it’d also check if your contacts are registered users in the database – using Parse for Mono. By doing so it’d either send the question to the app installed on their mobile device or send a text message with a link to a website where you can answer the question.

The database back-end is provided by Parse in a noSQL cross-platform plugin, which meant that any platform would be support – as long as the Mono runtime would support the platform. Parse then allowed to view some statistics and trends based on your data and user activity, however, not as “in-depth” as plugins like Google Analytics. So GA was also integrated to get a better idea of the flow and user interaction.

Unfortunately a demo .apk is not available right now, but hopefully these screenshots will give you an idea about how it works.